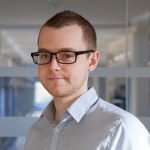 Published on 12 April 2022 Print this document

Trial pit photographs captured using conventional digital cameras during ground investigation works are typically of poor quality because of lighting conditions and viewpoint, missing out on key opportunity to capture a photographic record of the in-situ ground conditions. The paper documents the findings of a 360-degree camera photography trial on the Phase 2A ground investigation works and makes recommendations for their use on future projects.

During ground investigation works, trial pits, comprising of an open excavation into the ground (typically 3-4m deep) are often carried out. Trial pits are a quick and effective method to:

A mechanical excavator is used to excavate a trial pit, with the spoil arisings placed to the side of the pit during the works. An experienced geologist systematically reviews the open excavation and spoil arisings and logs the details of the soil and/or rock encountered. For shallow depths trial pits are one of the most effective methods of ascertaining a detailed understanding of the ground conditions. See Figure 1 for a typical trial pit setup.

Once the trial pit has reached the final depth, and prior to backfilling, photographs of the pit are captured as a record. Good quality photographs are an incredibly useful resource and are often reviewed later by others to understand the ground conditions. The photographs are taken from ground level looking down the hole and of the spoil arisings. The end, or shortest side of the pit is the most stable and is therefore where photographs are often taken from.

The unfortunate reality is that trial pit photographs captured using conventional cameras are often of poor quality, with detail not being captured, and in some cases, are completely un-useable. This is a common, and often unavoidable industry problem, due to:

See Figure 2 for an example.

Historically in the UK, stable trial pits were sometimes entered by the logging engineer. This is incredibly dangerous and is understandably no longer modern practice without significant additional measures being provided i.e. via a shored excavation with confined spaces protocols observed. Logging the material in the pit from the surface limits the amount the engineer can visually see of the exposed faces of a standard trial pit, meaning that most logging commonly relies significantly on an examination of the spoil arisings.

During the Phase 2A ground investigation works, the Arup Investigation Supervisor team (IS team), investigated the use of 360-degree cameras as a method of better capturing a visual record of trial pits.

Two off the shelf cameras were tested in the trial; a Panono and Ricoh Theta, see Figure 3 and 4 respectively below. The Panano consists of 36 cameras arranged around a sphere, and the Ricoh Theta of two 180-degree cameras arranged either side of the device. Both devices connect to a smart phone via a purpose-built app, which allows remote capture and review of the 360-degree images.

The price of the Panono and Ricoh cameras at the time of writing are approximately £900 and £300 respectively.

For the trial, the 360 cameras were attached to a pole and lowered into the trial pit from a safe working platform positioned at the trial pits shorter edge to capture the photographs. See Figure 5 below.

This method required two persons; one to safely lower the camera into the pit from working platform, and a second to capture the photograph remotely using the relevant mobile app. Multiple photographs at several positions in the pit were taken to ensure good coverage.

Additional lighting can be provided in the form of LED spotlights, although this development wasn’t available during the trials. Photographs were saved to the internal memory of the device and viewed later using the manufactures software.

The testing was carried out on several trial pits and deemed an overall success. The 360 cameras provided very detailed images displaying the exposed excavated faces of the pit in great detail.

Throughout the trials, the initial attachment of the camera to a pole with gaffer tape developed into using an lightweight extendible fibreglass tripod pole connected to the cameras via standard screw attachments (see Figure 6 below). The camera was also later attached to the excavator bucket by some contractors to remove the need to manually lower a pole into the pit at all.

The Panono camera required significant post-processing of the images files to generate a 360-image. Whilst the processing methods may provide more control on the output; it did prove more difficult and time consuming to get a useable output. The Ricoh camera stitched the 360-photos automatically and produced standard images files (.jpg) like that can be copied directly from the device’s internal memory.

At the time of writing Ricoh provide a free software to view the 360-images and navigate around on a computer screen. It was found best to only view 180degrees and use the pan function to avoid a distorted view; images could also be viewed in virtual reality (VR). See Figure 7 below for example snapshot from Ricoh software.

The ability to pan around the pit and zoom into detail added extra value over traditional methods, by providing a new perspective view from inside the pit which isn’t possible in person.

Some warping of the imagery was present at distances from the camera location, and for later trials the inclusion of a measuring staff for scale was found to be helpful. Capturing photos within multiple locations in the pit helped provide better local context and detail with less warping. It is understood that multiple 360 photos can be combined in software to navigate quickly between; however this requires further setup.

From traditional trial pit photographs, lighting is a common issue, with the pit being cast in shade and surroundings in full daylight causing exposure differences. It was found during the trials that once the camera was in the shade of the pit, the auto-exposure of the camera worked well, with only the sky being over-exposed, which isn’t an issue.

Use of the 360 camera has now been specified on the most recent Stage 2A ground investigation.

The following recommendations are made for projects carrying out similar work:

The trial was successful, providing a safe and cost-effective method for capturing better observational photographs in trial pits when compared to traditional methods. The use of 360 cameras is something that has since begun to gain traction in the ground investigation industry, with clients including 360-degree cameras in specifications, and ground investigation contractors investing in the relatively in-expensive kit.

Further example 360-degree trial pit photos are provided below in Figures 8 & 9, showing an exposed trial pit face and level of detail visible when zoomed in. The detailed 360-degree views of the open excavations provide extra value to geotechnical and geo-environmental engineers in assessing and understanding the ground.

Thinking beyond capturing static images of trial pits. 360-degree video capture is possible with the hardware tested, this could enhance the real-time logging of the pit and quality of information acquired for the permanent record. Further post-processing of images and video could generate 3D reality capture models to be used in BIM environments. Beyond trail pitting, earthwork excavation records and observations could be captured in a similar manner.

The Arup IS team would like to acknowledge Balfour Beatty, Socotec & Structural Soils Ltd. for accommodating the trials.

See below for links of the hardware used in the trial: